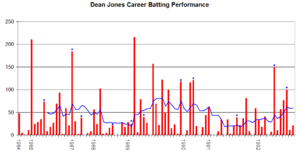 Dean Mervyn Jones (24 March 1961 – 24 September 2020) was an Australian cricket player, coach and commentator who played Tests and One Day Internationals (ODIs) for Australia.

He had an excellent record in Test cricket and is best remembered for revolutionising the ODI format.Through the late 1980s and early 1990s, he was recognised as among the best ODI batsmen in the world, a view which has been validated in the retrospective ICC Player Rankings.

His batting was often characterised by his agile footwork against both pace and spin, quick running between wickets, and willingness to take risks and intimidate bowlers.

In 2019, Jones was inducted into the Australian Cricket Hall of Fame.

Australian cricket player
Back
This content was extracted from Wikipedia and is licensed under the Creative Commons Attribution-ShareAlike 3.0 Unported License