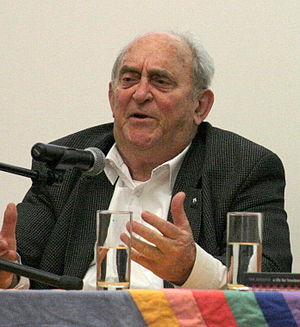 Denis Theodore Goldberg (11 April 1933 – 29 April 2020) was a South African social campaigner, who was active in the struggle against apartheid.

He was accused No. 3 in the Rivonia Trial, alongside the better-known Nelson Mandela and Walter Sisulu, where he was also the youngest of the defendants.

He was imprisoned for 22 years, along with other key members of the anti-apartheid movement in South Africa.After his release in 1985 he continued to campaign against apartheid from his base in London with his family, until the apartheid system was fully abolished with the 1994 election.

He returned to South Africa in 2002 and founded the non-profit Denis Goldberg Legacy Foundation Trust in 2015.He was diagnosed with lung cancer in July 2019, and died in Cape Town on 29 April 2020.