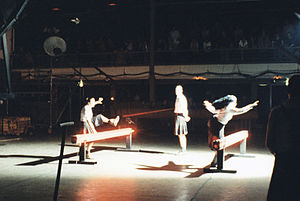 He is considered a pioneer in the field of electronic music and tape music, but has also produced numerous musical theater pieces and theoretical publications.

Raaijmakers studied piano at the .From 1954 to 1960, he worked at Koninklijke Philips Electronics N.V. in Eindhoven in the electro-acoustic field.

Under the pseudonym Kid Baltan, a anadrome of "Dik Natlab" - Raaijmakers' nickname, he realized three tests of popular music with the help of electronic means. in the world).

This work has been collected and re-released under the name Popular Electronics.Early Dutch electronic music from Philips Research Laboratories, 1956-1963.

From 1960 to 1962, he was affiliated with the University of Utrecht as a researcher.From 1963 to 1966, he worked with Jan Boerman in a self-established studio for electronic music in The Hague.

Dutch composer
Back
This content was extracted from Wikipedia and is licensed under the Creative Commons Attribution-ShareAlike 3.0 Unported License