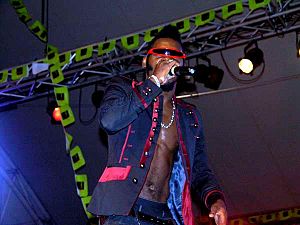 Ange Didier Houon (26 January 1986 – 12 August 2019), known professionally as DJ Arafat, Arafat Muana and various other stage names, was an Ivorian DJ and singer who made music in the Coupé-Décalé genre. "Jonathan", "202", "Dosabado", "Kpangor", "Zoropoto" and "Enfant Beni" were some of his major hits.

He was popular in French-speaking countries in Africa.He was awarded the "Best Artist of the Year" at the Coupé-Decalé Awards in the year 2016 and 2017.

Disc jockey
Back
This content was extracted from Wikipedia and is licensed under the Creative Commons Attribution-ShareAlike 3.0 Unported License