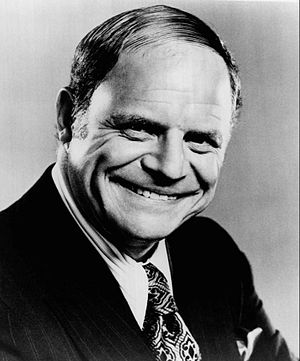 Donald Jay Rickles (May 8, 1926 – April 6, 2017) was an American stand-up comedian, actor, and author.He became known especially for his insult comedy.

From 1976 to 1978, Rickles had a two-season starring role in the NBC television sitcom C.P.O.Sharkey, having previously starred in the eponymous sitcom The Don Rickles Show (1972).

A veteran headline performer at Las Vegas hotel-casinos and peripheral member of the Rat Pack via friendship with Frank Sinatra, Rickles received widespread exposure as a frequent guest on talk and variety shows, including The Dean Martin Show, The Tonight Show Starring Johnny Carson and Late Show with David Letterman, and later voicing Mr.

Potato Head in the Toy Story franchise.He won a Primetime Emmy Award for the 2007 documentary Mr.Warmth: The Don Rickles Project.

In 2014, he was honored by fellow comedians at the Apollo Theater which was taped and released on Spike TV entitled, Don Rickles: One Night Only.

Stand-up comedian
Back
This content was extracted from Wikipedia and is licensed under the Creative Commons Attribution-ShareAlike 3.0 Unported License