Dorothy Day (November 8, 1897 – November 29, 1980) was an American journalist, social activist and anarchist who, after a bohemian youth, became a Catholic without abandoning her social and anarchist activism.

She was perhaps the best-known political radical among American Catholics.Day's conversion is described in her 1952 autobiography, The Long Loneliness.

Day was also an active journalist, and described her social activism in her writings.In 1917 she was imprisoned as a member of suffragist Alice Paul's nonviolent Silent Sentinels.

In the 1930s, Day worked closely with fellow activist Peter Maurin to establish the Catholic Worker Movement, a pacifist movement that combines direct aid for the poor and homeless with nonviolent direct action on their behalf.

She practiced civil disobedience, which led to additional arrests in 1955, 1957, and in 1973 at the age of seventy-five.As part of the Catholic Worker Movement, Day co-founded the Catholic Worker newspaper in 1933, and served as its editor from 1933 until her death in 1980.

In this newspaper, Day advocated the Catholic economic theory of distributism, which she considered a third way between capitalism and socialism.

Pope Benedict XVI used her conversion story as an example of how to "journey towards faith ... in a secularized environment." In an address before the United States Congress, Pope Francis included her in a list of four exemplary Americans who "buil[t] a better future".

The Church has opened the cause for Day's possible canonization, which was accepted by the Holy See for investigation.For that reason, the Church refers to her with the title of Servant of God. 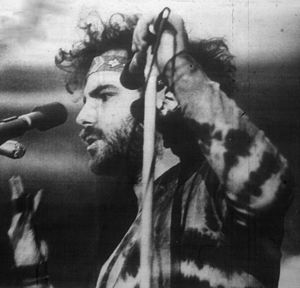