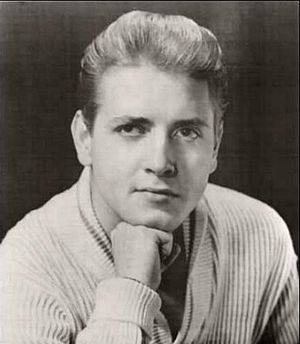 He experimented with multitrack recording, distortion techniques, and overdubbing even on his earliest singles.He played the guitar, piano, bass, and drums.

His image as a sharply dressed and attractive young man with a rebellious attitude epitomized the stance of the 1950s rocker, and in death he achieved iconic status.

Cochran was involved with music from an early age, playing in the school band and teaching himself to play blues guitar.

In 1954, he formed a duet with the guitarist Hank Cochran (no relation).When they split the following year, Eddie began a songwriting career with Jerry Capehart.

His first success came when he performed the song "Twenty Flight Rock" in the film The Girl Can't Help It, starring Jayne Mansfield.

Soon afterward, he signed a recording contract with Liberty Records and his first record for the label, "Sittin' in the Balcony", rose to number 18 on the Billboard charts.

Cochran died at age 21 in St Martin's Hospital, Bath, Somerset, after a road accident in Chippenham, Wiltshire, at the end of his British tour in April 1960.

In 1987, Cochran was inducted into the Rock and Roll Hall of Fame.His songs have been recorded by a wide variety of recording artists.