Jacobus Hendricus ("Jack") van Lint (1 September 1932 – 28 September 2004) was a Dutch mathematician, professor at the Eindhoven University of Technology, of which he was rector magnificus from 1991 till 1996.

He gained his Ph.D. from Utrecht University in 1957 under the supervision of Fred van der Blij.He was professor of mathematics at Eindhoven University of Technology from 1959 to 1997.

He was appointed a full professor at Eindhoven University of Technology at the age of 26 years.His field of research was initially number theory, but he worked mainly in combinatorics and coding theory.

Van Lint was honored with a great number of awards.He became a member of Royal Netherlands Academy of Arts and Sciences in 1972, received four honorary doctorates, was an honorary member of the Royal Netherlands Mathematics Society (Koninklijk Wiskundig Genootschap), and received a Knighthood. 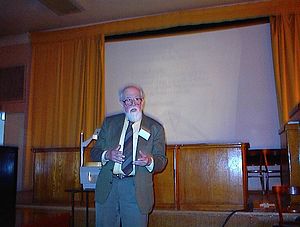 Dutch mathematician
Back
This content was extracted from Wikipedia and is licensed under the Creative Commons Attribution-ShareAlike 3.0 Unported License