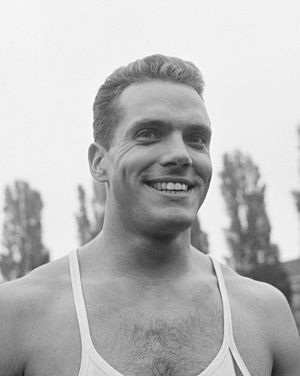 Evert "Eef" Kamerbeek (17 March 1934 – 26 August 2008) was one of the best Dutch decathletes of all time.Between 1954 and 1964, he won 11 national decathlon titles, as well as seven titles in the 110 m hurdles and four titles in the 200 m hurdles, discus throw and javelin throw; he also occasionally competed in weight lifting.

At European championships, Kamerbeek finished in sixth and fourth place in 1958 and 1962, respectively.Kamerbeek was selected as the Dutch Sportsman of the year 1960.

His father Henk was an Olympic hammer thrower and chairman of the athletics section of the Philips Sports Club (PSV).

After retiring from competitions, Evert worked for Philips in various functions and succeeded his father as chairman of the athletics section of PSV.