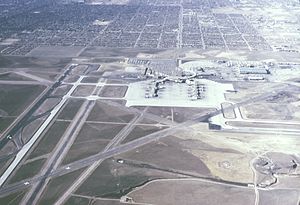 Emily Howell Warner (October 30, 1939 – July 3, 2020) was an American airline pilot and the first woman captain of a scheduled US airline.

In 1973, Warner was the first woman pilot to be hired by a scheduled US airline since Helen Richey was hired as a co-pilot in 1934.

In 1976 Warner was the first woman to become a US airline captain.Her career has been recognized by multiple halls of fame, including the National Aviation Hall of Fame and National Women’s Hall of Fame.

Her pilot’s uniform is on display at the Smithsonian's National Air and Space Museum.In addition to piloting, Warner was a flight school manager in Denver, Colorado.

She was a flight instructor and FAA designated flight examiner holding multiple ratings.She flew more than 21,000 flight hours and performed more than 3,000 check rides and evaluations over her career.

Warner died in 2020 from complications of a fall and Alzheimer's disease.