Enric R.Madriguera (17 February 1902 – 7 September 1973) was a violinist of Catalan origin who was playing concerts as a child before he studied at the Barcelona Conservatory. (The Castilian form of his name is Enrique, which he sometimes used on records.) 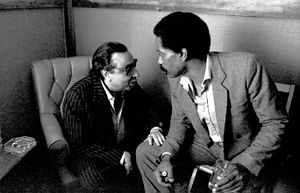 Spanish musician
Back
This content was extracted from Wikipedia and is licensed under the Creative Commons Attribution-ShareAlike 3.0 Unported License