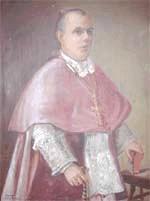 He later studied at the San Carlos and San Ambrosio Seminary and at the University of Havana.He was ordained a priest in 1867.

He served as a priest in various parishes.On February 20, 1903, he was a priest at the parish of Santo Angel when he was elevated by Pope Leo XIII as the first Bishop of the new Diocese of Pinar del Río.

He died October 21, 1904 and his funeral was held at the Cathedral of San Rosendo in Pinar del Río.His post was left vacant until 1907 when was made bishop.