Enrique Mac Iver Rodríguez (15 July 1844 – 21 August 1922) was a Chilean lawyer and politician.He participated in the 1891 Chilean Civil War on the side of the victorious Congressist faction doing himself the first draft for the deposition of president José Manuel Balmaceda. 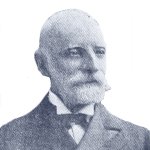 Chilean politician
Back
This content was extracted from Wikipedia and is licensed under the Creative Commons Attribution-ShareAlike 3.0 Unported License