A total of 7,321 awards were made between its first presentation on 30 September 1939 and its last bestowal on 17 June 1945.This number is based on the analysis and acceptance of the Order commission of the Association of Knight's Cross Recipients (AKCR).

Listed here are the 448 Knight's Cross recipients of the Wehrmacht and Waffen-SS whose last name starts with "R".The AKCR named 447 recipients.

Scherzer has challenged the validity of 11 of these listings but also identified one additional legitimate recipient, Siegfried Rieger.The recipients are initially ordered alphabetically by last name.

The rank listed is the recipient's rank at the time the Knight's Cross was awarded. 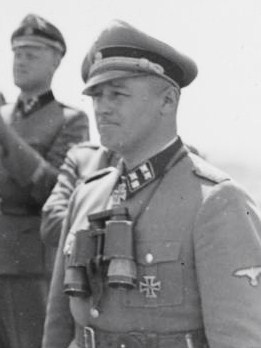 
SS Officer
Back
This content was extracted from Wikipedia and is licensed under the Creative Commons Attribution-ShareAlike 3.0 Unported License