Erik Brofoss (21 June 1908 - 7 May 1979) was a Norwegian economist and politician for the Labour Party.Brofoss was born in Kongsberg.

In his younger days he was an athlete who competed national level in the 100 metres.He represented Kongsberg IF, and won a silver medal at the Norwegian championships in 1928.

He became Minister of Finance in 1945 and stayed in this position until 1947.He then helped found the Ministry of Trade and Shipping and headed it from 1947 to 1954.

He was later a director of the Executive Board of the International Monetary Fund from 1970 to 1973. 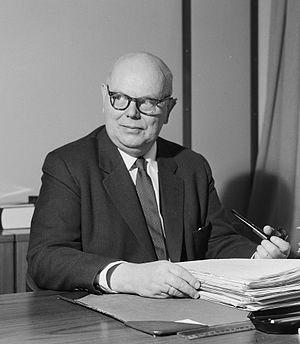