Ernest John "Aqua" Allmendinger (August 25, 1890 – May 7, 1973) was an American football player and coach.He played college football as a guard for the University of Michigan Wolverines from 1911 to 1913.

He was also selected to Walter Camp's All-Service team while serving in the military during World War I. 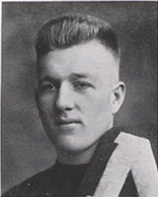 
American football player
Back
This content was extracted from Wikipedia and is licensed under the Creative Commons Attribution-ShareAlike 3.0 Unported License