Ernest Marie Louis Bedel (16 May 1849, Nantes – 26 January 1922, Paris) was a French entomologist who specialised in Coleoptera.Louis Bedel studied first in Nantes then in Paris where the future entomologist (1849-1933) was a fellow student.

His father arranged his taking part in natural history sorties where he met great names of natural history like Alcide d'Orbigny (1802-1857) and which were also attended by future scientists in other disciplines like Henry Le Chatelier (1850-1936), Henri d'Orbigny (1845-1915) and Pierre Emile Gounelle (1850-1914).

He took part in the war of 1870 before continuing his law studies.Bedel wrote nearly 300 publications mainly devoted to the Coleopters.

His collection is preserved at the Muséum national d'Histoire naturelle. 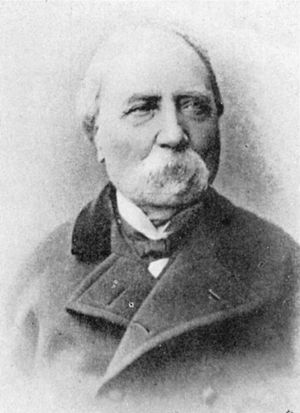 French entomologist
Back
This content was extracted from Wikipedia and is licensed under the Creative Commons Attribution-ShareAlike 3.0 Unported License