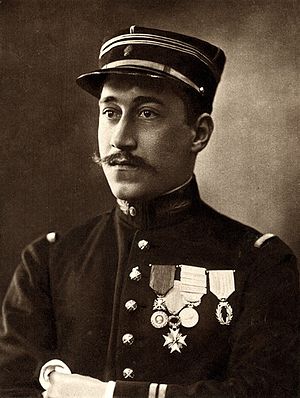 After a troubled upbringing which saw him attempt suicide over an unrequited love, Psichari entered the army for his national service.

Enjoying military life, he re-enlisted in the ranks and transferred to the Troupes coloniales in search of adventure abroad.He saw service in the French Congo and Mauritania and wrote a number of militaristic autobiographical works that proved popular with French nationalists.

Converting to Catholicism in 1913, Psichari considered becoming a priest but instead decided he could better serve his church in the army.

Fighting in the defence of Belgium in August 1914 during World War I, he was killed at Rossignol during the Battle of the Frontiers.

French naturalist
Back
This content was extracted from Wikipedia and is licensed under the Creative Commons Attribution-ShareAlike 3.0 Unported License