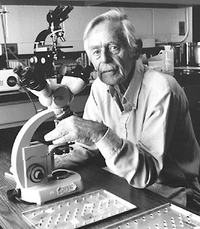 Ernst J Eichwald (1913–2007) was a pathologist known for his pioneering work in tissue transplantation and research on genetic factors that influence the rejection of organ transplantation.

Dr.Eichwald, while studying cancer in the 1940s, described the male-specific antigen and helped establish the foundations of transplantation immunology.

His research played an important role in the development of successful protocols for organ transplantation in humans.