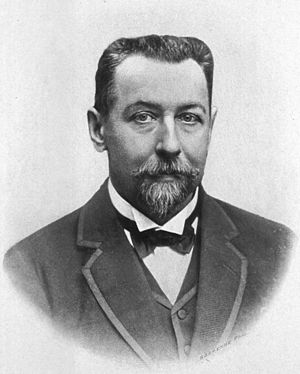 Eugène Doyen studied medicine in Reims and Paris, and later opened a private medical institute in Paris that attracted a wealthy clientele.

Doyen was a skilled and innovative physician who introduced several surgical techniques and medical instruments, some of which bear his name today.

He was a pioneer in the use of electrosurgery and electrocoagulation, and also marketed a yeast extract he called "mycolysine" for treatment of infectious diseases.

He produced numerous films of operations, including a craniectomy, an abdominal hysterectomy, and a surgery for separation of conjoined twins Radhika and Dudhika Nayak, united in the area of the xiphoid process of the sternum.

Although his films were popular at medical conferences abroad, they were harshly criticized by his contemporaries in France, who felt that the integrity of their profession had been compromised.

For a period of time, Doyen was editor-in-chief of the Revue Critique de Médecine et de Chirurgie, as well as the Archives de Doyen, a medico-surgical journal of the Doyen Institute.

French surgeon
Back
This content was extracted from Wikipedia and is licensed under the Creative Commons Attribution-ShareAlike 3.0 Unported License