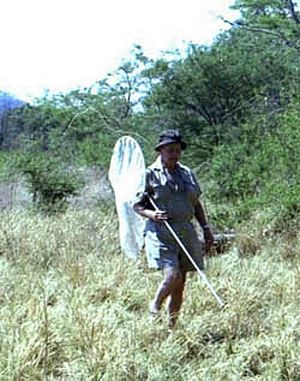 Elliot Charles Gordon Pinhey (18 July 1910 in Knokke, Bruges – 7 May 1999 in Cowfold near Horsham, West Sussex) was an entomologist who worked in Africa and specialised in African Lepidoptera and Odonata.

Born of British parents on holiday in Belgium, Pinhey made major contributions in entomology to the knowledge of butterflies, moths and dragonflies.

Elliot Pinhey's interest in natural history first developed during his early education in England.He obtained a BSc at the University of London in mathematics, physics, chemistry and biology in 1934, after which he joined the teaching profession as a Science Master.

His chronically poor health led to his doctor's suggesting he emigrate to a more congenial climate.Accordingly, he arrived in Southern Rhodesia in 1939 and took up a teaching post as Science Master.

A stint with the Royal Air Force Meteorology department followed, and on his release he joined the Agriculture Department as economic entomologist, working on Acarina, Coccoidea and Chrysomelidae.

His interest in Odonata surfaced in 1947 through J.A.Whelan who had joined his department, and Colonel F.C.Fraser who encouraged him.

He joined the Transvaal Museum in Pretoria as assistant professional officer in entomology and later became the Museum's Odonata specialist.

He was with the Coryndon Museum in Nairobi from 1949 to 1955 under Dr.LSB Leakey, during which period he was able to collect extensively in East and Central Africa, and develop an interest in Orthoptera and Hemiptera which he was not able to follow up.

Pinhey was invited in 1955 to take up the position of Keeper of Invertebrate Zoology at the National Museum in Bulawayo.

He was awarded a D.Sc. by the University of London in 1962 for his publications in entomology.He served as President of the Entomological Society of Southern Africa from 1974 to 1975, was an active member of the Societas Internationalis Odonatologica (SIO) and was widely regarded as the doyen of African Odonatology.

Elliot Pinhey published almost 200 names for species, subspecies and forms of Odonata in thirty-three years, from 1950 to 1982.He named more than a tenth of known Afrotropical species, making him the most prolific author of that fauna aside from his predecessor, Frederic Fraser (Dijkstra et al. 2003).

Sixty-three percent of his primary types are held in the Natural History Museum of Zimbabwe in Bulawayo (NMBZ), where he worked from 1955 to 1980.

His legacy is one of the major collections of African Odonata in the world and the most important one in the continent itself (Vick et al. 2001).

There are 112 name-bearing types designated by Pinhey, His numerous collecting trips led him to associate with such authorities as Dr Henry Bernard Davis Kettlewell (lepidopterist and geneticist known for his research on industrial melanism), Capt. British entomologist
Back
This content was extracted from Wikipedia and is licensed under the Creative Commons Attribution-ShareAlike 3.0 Unported License