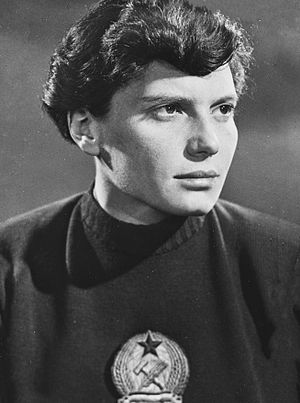 She held the first world record in the 400 m individual medley in 1953.Earlier in 1941 Székely set a national speed record, although she was barely allowed to start because she was a Jew.

She was excluded from competition for the next four years, and survived the Holocaust partly because she was a famous swimmer.Her daughter, Andrea Gyarmati was a backstroke and butterfly swimmer who won two medals at the 1972 Summer Olympics in Munich.

Her former husband Dezső Gyarmati is a multiple Olympic champion in water polo.After retiring from competitions Székely worked as a pharmacist and swimming coach, training her daughter among others.

In 1976 she was inducted to the International Swimming Hall of Fame.She wrote three books, one of which was translated to other languages.Only winners are allowed to cry! (Sírni csak a győztesnek szabad!) Budapest, 1981, Magvető KiadóI came, I saw, I lost? (Jöttem, láttam… Vesztettem?) Budapest, 1986, Magvető KiadóI Swam It/I Survived (Megúsztam) Budapest, 1989, Sport Kiadó

Hungarian swimmer
Back
This content was extracted from Wikipedia and is licensed under the Creative Commons Attribution-ShareAlike 3.0 Unported License