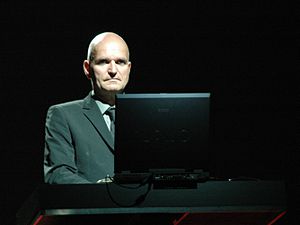 Florian Schneider-Esleben (7 April 1947 – 21 April 2020) was a German musician.He is best known as one of the founding members and leaders of the electronic band Kraftwerk, performing his role with the band until his departure in 2008.

On May 12, 2021, Kraftwerk was announced as one of the inductees of the Rock and Roll Hall of Fame.