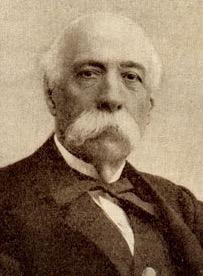 Francesco Crispi (4 October 1818 – 12 August 1901) was an Italian patriot and statesman.He was among the main protagonists of the Risorgimento, a close friend and supporter of Giuseppe Mazzini and Giuseppe Garibaldi and one of the architects of Italian unification in 1860.

Crispi was internationally famous and often mentioned along with world statesmen such as Bismarck, Gladstone and Salisbury.Originally an Italian patriot and democrat liberal, he went on to become a bellicose authoritarian prime minister and ally and admirer of Bismarck.

He was indefatigable in stirring up hostility toward France.His career ended amid controversy and failure: he got involved in a major banking scandal and fell from power in 1896 after the devastating loss of the Battle of Adwa, which repelled Italy's colonial ambitions over Ethiopia.

Due to his authoritarian policies and style, Crispi is often regarded as a strongman and seen as a precursor of the fascist dictator Benito Mussolini.