Dictator and head of state of Spain 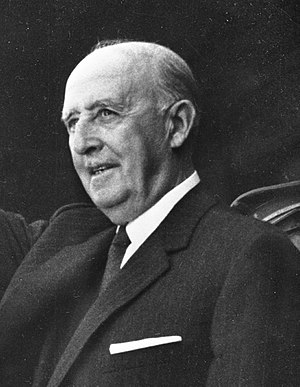 Francisco Franco Bahamonde (Spanish: [fɾanˈθisko ˈfɾaŋko βa.aˈmonde]; 4 December 1892 – 20 November 1975) was a Spanish general who led the Nationalist forces in overthrowing the Second Spanish Republic during the Spanish Civil War and thereafter ruled over Spain from 1939 to 1975 as a dictator, assuming the title Caudillo.

This period in Spanish history, from the Nationalist victory to Franco's death, is commonly known as Francoist Spain or the Francoist dictatorship.

Born in Ferrol, Galicia, into an upper-class military family, Franco served in the Spanish Army as a cadet in the Toledo Infantry Academy from 1907 to 1910.

While serving in Morocco, he rose through the ranks to become brigadier general in 1926, aged 33, becoming the youngest general in Spain.

Two years later, Franco became the director of the General Military Academy in Zaragoza.As a conservative and monarchist, Franco regretted the abolition of the monarchy and the establishment of the Second Republic in 1931.

He was devastated by the closing of his Academy; but nevertheless, he continued his service in the Republican Army.His career redoubled after the right-wing CEDA and PRR won the 1933 election, empowering him to lead the suppression of the 1934 uprising in Asturias.

Franco was briefly elevated to Chief of Army Staff before the 1936 election moved the leftist Popular Front into power, relegating him to the Canary Islands.

After initial reluctance, he joined the July 1936 military coup, which, after failing to take Spain, sparked the Spanish Civil War.

During the war, he commanded Spain's African colonial army.Later after the death of much of the rebel leadership, he became his faction's only leader, appointed Generalissimo and Head of State in 1936.

He consolidated all nationalist parties into the FET y de las JONS (creating a one-party state).Three years later the Nationalists declared victory, which extended Franco's dictatorship over Spain through a period of repression of political opponents.

His dictatorship's use of forced labor, concentration camps and executions led to between 30,000 and 50,000 deaths.Combined with wartime killings, this brings the death toll of the White Terror to between 100,000 and 200,000.

In post-civil war Spain, Franco ruled with more power than any Spanish leader before or since.Franco developed a cult of personality around his rule by founding the Movimiento Nacional.

During World War II he maintained Spanish neutrality but supported the Axis—whose members Italy and Germany had supported him during the Civil War—in various ways, damaging the country's international reputation.

During the start of the Cold War, Franco lifted Spain out of its mid-20th century economic depression through technocratic and economically liberal policies, presiding over a period of rampant growth known as the "Spanish miracle".

At the same time, his regime transitioned from being totalitarian to authoritarian with limited pluralism.The party became a leader in the anti-Communist movement, garnering support from the West, particularly the United States.

In 1973, Franco resigned as prime minister—separated from the head of state office since 1967—due to advanced age and illness.

Nevertheless, he remained in power as the latter and as commander-in-chief.Franco died in 1975, aged 82 and was entombed in the Valle de los Caídos.

He restored the monarchy in his final years, being succeeded by Juan Carlos as King of Spain, who led the Spanish transition to democracy.

The legacy of Franco in Spanish history remains controversial, as the nature of his dictatorship changed over time.His reign was marked by both brutal repression, with tens of thousands killed, and economic prosperity, which greatly improved the quality of life in Spain.