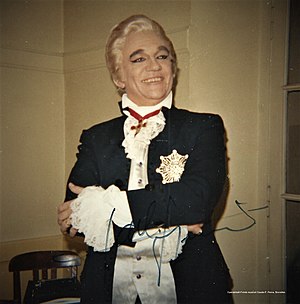 Gabriel Bacquier (French pronunciation: ​[gabʁjel bakje]; 17 May 1924 – 13 May 2020) was a French operatic baritone.One of the leading baritones of the 20th century and particularly associated with the French and Italian repertoires, he was considered a fine singing actor equally at home in dramatic or comic roles and gave regular song recitals.

He was a long-term member of the Opéra-Comique and the Paris Opera, but forged a long career internationally at leading opera houses in Europe and the U.S.

His large discography spans five decades, and he was considered as “the ambassador of French song”.

Operatic baritone
Back
This content was extracted from Wikipedia and is licensed under the Creative Commons Attribution-ShareAlike 3.0 Unported License