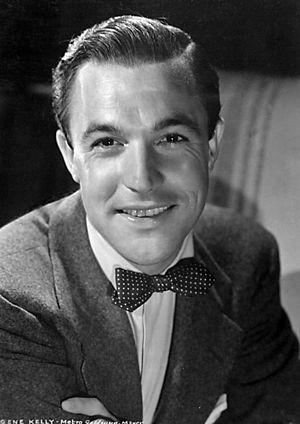 Eugene Curran Kelly (August 23, 1912 – February 2, 1996) was an American actor, dancer, singer, filmmaker, and choreographer.He was known for his energetic and athletic dancing style, his good looks, and the likable characters that he played on screen.

In 1967, he appeared in French director Jacques Demy's musical comedy The Young Girls of Rochefort opposite Catherine Deneuve.Kelly solo directed the comedy A Guide for the Married Man (1967) starring Walter Matthau, and later the extravagant musical Hello, Dolly! (1969) starring Barbra Streisand, recognized with an Oscar nomination for Best Picture.

His many innovations transformed the Hollywood musical, and he is credited with almost single-handedly making the ballet form commercially acceptable to film audiences.

Kelly received an Academy Honorary Award in 1952 for his career achievements; the same year, An American in Paris won six Academy Awards, including Best Picture.

He later received lifetime achievement awards in the Kennedy Center Honors (1982) and from the Screen Actors Guild and American Film Institute.

In 1999, the American Film Institute also ranked him as the 15th greatest male screen legend of Classic Hollywood Cinema.