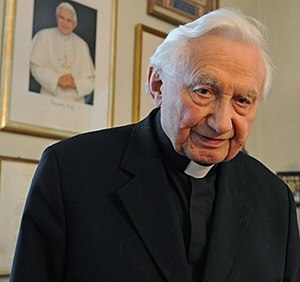 Georg Ratzinger PA (15 January 1924 – 1 July 2020) was a German Catholic priest and musician, known for his work as the conductor of the Regensburger Domspatzen, the cathedral choir of Regensburg.

He was the elder brother of Pope Benedict XVI (Joseph Ratzinger).His great-uncle was the German politician Georg Ratzinger.

Catholic priest
Back
This content was extracted from Wikipedia and is licensed under the Creative Commons Attribution-ShareAlike 3.0 Unported License