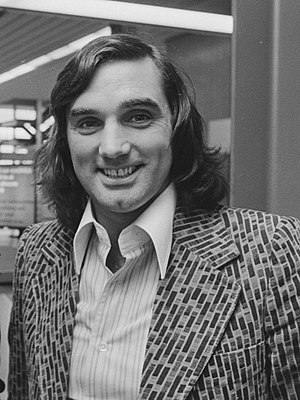 George Best (22 May 1946 – 25 November 2005), also known as Georgie Best, was a Northern Irish professional footballer who played as a winger, spending most of his club career at Manchester United.

A highly skilful dribbler, Best is regarded as one of the best players in the history of the sport.He was named European Footballer of the Year in 1968 and came sixth in the FIFA Player of the Century vote.

Best received plaudits for his playing style, which combined pace, skill, balance, feints, two-footedness, goalscoring and the ability to get past defenders.

Born and brought up in Belfast, Best began his club career in England with Manchester United, with the scout who had spotted his talent at the age of 15 sending a telegram to manager Matt Busby which read: "I think I've found you a genius." After making his debut aged 17, he scored 179 goals from 470 appearances over 11 years, and was the club's top goalscorer in the league for five consecutive seasons.

He won two League titles and the European Cup with the club.His style of play on the field captured the public's imagination, and in 1999 he was on the six-man short-list for the BBC's Sports Personality of the Century.

He was also an inaugural inductee into the English Football Hall of Fame in 2002.In international football, Best was capped 37 times for Northern Ireland between 1964 and 1977.

A combination of the team's performance and his lack of fitness in 1982 meant that he never played in the finals of a major tournament.

He considered his international career as being "recreational football", with the expectations placed on a smaller nation in Northern Ireland being much less than with his club.

He is regarded as one of the greatest players never to have played at a World Cup.The Irish Football Association described him as the "greatest player to ever pull on the green shirt of Northern Ireland".

With his good looks and playboy lifestyle, Best became one of the first media celebrity footballers, earning the nickname "El Beatle" by Portuguese press reporters after a stand-out performance for Manchester United in Lisbon in March 1966, but his extravagant life style led to various personal problems, most notably alcoholism, which he suffered from for the rest of his life.

These issues affected him on and off the field, often causing controversy.Although conscious of his problems, he was publicly not contrite about them; he said of his career: "I spent a lot of money on booze, birds [women] and fast cars – the rest I just squandered".

After football, he spent some time as a football analyst, but his financial and health problems continued into his retirement.

He died in 2005, aged 59, due to complications from the immunosuppressive drugs he needed to take after a liver transplant in 2002.