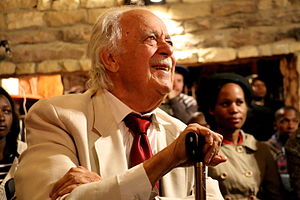 He was noted for representing Nelson Mandela during the Rivonia Trial.He instructed Mandela to add the qualification "if needs be" to his trial address, which is credited with sparing him from a sentence of death.

Bizos also represented the families of anti-apartheid activists killed by the government, throughout the hearings of the Truth and Reconciliation Commission.