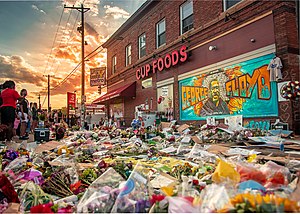 George Perry Floyd Jr. (October 14, 1973 – May 25, 2020) was an African-American man who was murdered by a police officer in Minneapolis, Minnesota, during an arrest after a store clerk suspected Floyd may have used a counterfeit $20 bill.

Derek Chauvin, one of four police officers who arrived on the scene, knelt on Floyd's neck and back for 9 minutes and 29 seconds.

After his death, protests against police brutality, especially towards black people, quickly spread across the United States and globally.His dying words, "I can't breathe," became a rallying cry.

Born in Fayetteville, North Carolina, Floyd grew up in Houston, Texas, playing football and basketball throughout high school and college.

He served as a mentor in his religious community.Between 1997 and 2005, he was convicted of eight crimes.He served four years in prison after accepting a plea bargain for a 2007 aggravated robbery in a home invasion.

In 2014, he moved to the Minneapolis area, residing in the nearby suburb of St.Louis Park, and worked as a truck driver and bouncer.

In 2020, he lost his job as a truck driver, and then his security job during the COVID-19 pandemic.The City of Minneapolis settled a wrongful death lawsuit with Floyd's family for $27 million.

The trial of the other three officers at the scene of his death is scheduled to begin on March 7, 2022.