Georges Moustaki (born Giuseppe Mustacchi; 3 May 1934 – 23 May 2013) was an Egyptian-French singer-songwriter of Jewish Italo-Greek origin, best known for the poetic rhythm and simplicity of the romantic songs he composed and often sang.

Moustaki gave France some of its best-loved music by writing about 300 songs for some of the most popular singers in that country, such as Édith Piaf, Dalida, Françoise Hardy, Yves Montand, Barbara, Brigitte Fontaine, Herbert Pagani, France Gall, Cindy Daniel, Juliette Gréco, Pia Colombo, and Tino Rossi, as well as for himself. 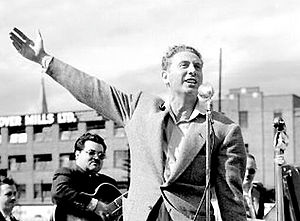