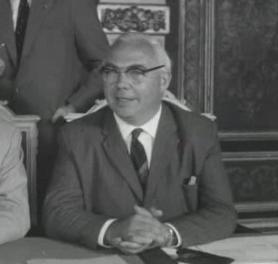 Veldkamp applied at the Tilburg Catholic Economic University in September 1945 majoring in Economics and obtaining an Bachelor of Economics degree in August 1946 and worked as a student researcher before graduating with an Master of Economics degree in May 1948 and continued his study at the Tilburg Catholic Economic University where worked as a researcher until he got a doctorate as an Doctor of Philosophy in Microeconomics on 10 November 1949.

Veldkamp worked as a civics teacher in Breda September 1947 until October 1952 and for the Labour Council in Breda from June 1948 until April 1950.

Veldkamp served on the Municipal Council of Breda from April 1948 until October 1952.After the election of 1952 Veldkamp was appointed as State Secretary for Economic Affairs in the Cabinet Drees II, taking office on 10 October 1952.

After the election of 1956 Veldkamp continued as State Secretary for Economic Affairs in the Cabinet Drees III, taking office on 13 October 1956.

The Cabinet Drees III fell on 11 December 1958 continued to serve in a demissionary capacity until the cabinet formation of 1958 when it was replaced by the caretaker Cabinet Beel II with Veldkamp remaining as State Secretary for Economic Affairs, taking office on 22 December 1958.

Veldkamp was elected as a Member of the House of Representatives after the election of 1959, taking office on 24 March 1959.Following the cabinet formation of 1959 Veldkamp continued as State Secretary for Economic Affairs in the Cabinet De Quay, taking office on 19 May 1959.

Veldkamp was appointed as Minister of Social Affairs and Health following the resignation of Charles van Rooy, taking office on 17 July 1961.

The Cabinet Marijnen fell on 27 February 1965 and continued to serve in a demissionary capacity until the cabinet formation of 1965 when it was replaced by the Cabinet Cals with Veldkamp continuing as Minister of Social Affairs and Health, taking office on 14 April 1965.

The Cabinet Cals fell just one year later on 14 October 1966 and continued to serve in a demissionary capacity until the cabinet formation of 1966 when it was replaced by the caretaker Cabinet Zijlstra with Veldkamp remaining as Minister of Social Affairs and Health, taking office on 22 November 1966.

In December 1966 Veldkamp announced that he wouldn't stand for the election of 1967.Following the cabinet formation of 1967 Veldkamp per his own request asked not to be considered for a cabinet post in the new cabinet, the Cabinet Zijlstra was replaced by the Cabinet De Jong on 5 April 1967.

Veldkamp semi-retired from active politics and became active in the private sector and public sector and occupied numerous seats as a corporate director and nonprofit director on several boards of directors and supervisory boards (Society for Statistics and Operations Research, World Press Photo, Leiden University Medical Center and the Society for the Advancement of Science, Medicine and Surgery) and served on several state commissions and councils on behalf of the government (Biesheuvel Commission, Netherlands Cadastre Agency, Public Pension Funds APB, Toxopeus Commission, Statistics Netherlands and the Scientific Council for Government Policy).

Veldkamp continued to comment on political affairs as a statesman until his death.He holds the distinction as the longest-serving State Secretary for Economic Affairs with 8 years.