Henny Skjønberg (6 August 1886 – 5 January 1973) was a Norwegian actress and stage director.Skjønberg was born as Henny Bucher Eide in Stavanger.

She was mainly employed at Det Norske Teatret in Oslo where with humour and irony she would specialize herself as a character comedian.

She also acted in movies from 1920 to 1967.Skjønberg's most famous role came as the cranky old aunt, Tante Pose in the 1940-movie of the same name.

For years it has been a staple of Christmas-entertainment, being shown on Norwegian television every December.Skjønberg also wrote several stage-comedies for children performed at Det Norske Teatret, and was an active instructor, mainly for children's-plays.She was married to actor Eugen Skjønberg (1889–1971), and is the mother of leading Norwegian actors Pål and Espen Skjønberg. 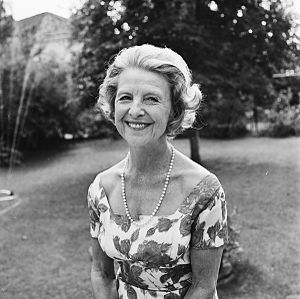 Norwegian actor
Back
This content was extracted from Wikipedia and is licensed under the Creative Commons Attribution-ShareAlike 3.0 Unported License