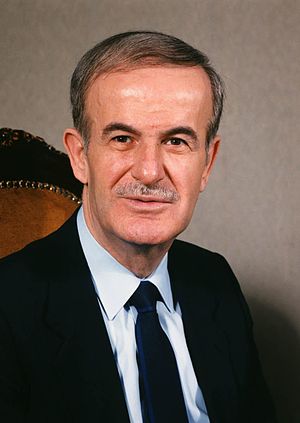 Assad participated in the 1963 Syrian coup d'état which brought the Syrian regional branch of the Arab Socialist Ba'ath Party to power, and the new leadership appointed him commander of the Syrian Air Force.

In February 1966, Assad participated in a second coup, which toppled the traditional leaders of the Ba'ath Party.Assad was appointed defence minister by the new government.

Assad imposed change on the Ba'ath government when he took power, by imposing capitalism and further pushing the agenda of private property and by strengthening the country's foreign relations with countries which his predecessor had deemed reactionary.

He sided with communism and the Soviet Union during the Cold War in return for support against Israel, and, while he had forsaken the pan-Arab concept of unifying the Arab world into one Arab nation, he sought to make Syria the defender of Palestine and Arab interests against Israel.

When he came to power, Assad organised state services along sectarian lines (the Sunnis became the heads of political institutions, while the Alawites took control of the military, intelligence, and security apparatuses).

The formerly collegial powers of Ba'athist decision-making were curtailed, and were transferred to the Syrian presidency.The Syrian government ceased to be a one-party system in the normal sense of the word, and was turned into a one-party dictatorship with a strong presidency.

To maintain this system, a cult of personality centred on Assad and his family was created by the president and the Ba'ath party.

Having become the main source of initiative inside the Syrian government, Assad began looking for a successor.His first choice was his brother Rifaat, but Rifaat attempted to seize power in 1983–84 when Hafez's health was in doubt.

Rifaat was subsequently exiled when Hafez's health recovered.Hafez's next choice of successor was his eldest son, Bassel.However, Bassel died in a car accident in 1994, and Hafez turned to his third choice—his younger son Bashar, who at that time had no political experience.

The move to appoint a member of his own family as his successor was met with criticism within some quarters of the Syrian ruling class, but Assad persisted with his plan and demoted officials who opposed this succession.

Hafez died in 2000 and Bashar succeeded him as president.