Rafiq accused Multan Cricket Club chairman Maulvi Muhammad Sultan Alam Ansari of sexual harassment during a cricket match in Multan Cricket Stadium, for which she was backed by her female teammates but was thereafter sued by Alam Ansari for ₨20 million. 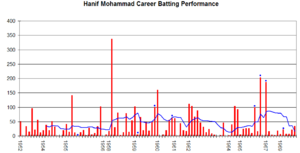 Pakistani cricketer
Back
This content was extracted from Wikipedia and is licensed under the Creative Commons Attribution-ShareAlike 3.0 Unported License