Hank Ballard (born John Henry Kendricks;November 18, 1927 – March 2, 2003) was an American R&B singer and songwriter, the lead vocalist of The Midnighters and one of the first rock and roll artists to emerge in the early 1950s.

He played an integral part in the development of the genre, releasing the hit singles "Work With Me, Annie" and answer songs "Annie Had a Baby" and "Annie's Aunt Fannie" with his Midnighters.

He later wrote and originally recorded (in 1959) "The Twist" which was notably covered a year later by Chubby Checker, this second version spreading the popularity of the dance.

He was inducted into the Rock and Roll Hall of Fame in 1990. 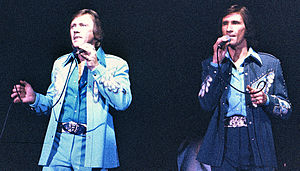 Czech opera singer
Back
This content was extracted from Wikipedia and is licensed under the Creative Commons Attribution-ShareAlike 3.0 Unported License