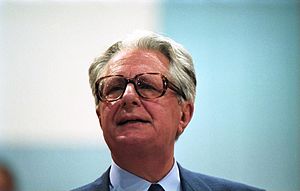 Hans-Jochen Vogel (3 February 1926 – 26 July 2020) was a German lawyer and a politician for the Social Democratic Party (SPD).He served as Mayor of Munich from 1960 to 1972, winning the 1972 Summer Olympics for the city and Governing Mayor of West Berlin in 1981, the only German ever to lead two cities with a million+ inhabitants.

In 1993, he co-founded the organisation Gegen Vergessen – Für Demokratie (Against Oblivion – For Democracy).He was a member of the National Ethics Council of Germany from its beginning in 2001.