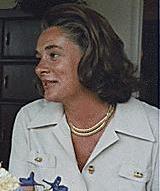 She was First Lady of New York from her marriage to then-Governor Rockefeller in 1963 until his resignation as Governor in 1973, and Second Lady of the United States during her husband's tenure as vice president from December 19, 1974 until his term ended on January 20, 1977.