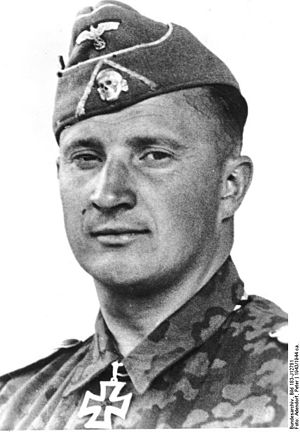 A total of 7,321 awards were made between its first presentation on 30 September 1939 and its last bestowal on 17 June 1945.This number is based on the analysis and acceptance of the order commission of the Association of Knight's Cross Recipients (AKCR).

Scherzer wrote his book in cooperation with the German Federal Archives.The book was chosen by Prof.Dr.Franz W.

Seidler for the library of the Bundeswehr University Munich and Deutsche Dienststelle (WASt) and is considered an accepted reference there.

For many years Fellgiebel's book was considered the main reference work on this topic, and it has now been succeeded by Scherzer's work.Listed here are the 437 Knight's Cross recipients of the Wehrmacht and Waffen-SS whose last name is in the range "Ha–Hm".

Fellgiebel himself delisted one and Scherzer has challenged the validity of 15 more of these listings.This is the first of two lists of all 661 Knight's Cross of the Iron Cross recipients whose last name starts with "H".

The recipients whose last name is in the range "Hn–Hz" are listed at List of Knight's Cross of the Iron Cross recipients (Hn–Hz).