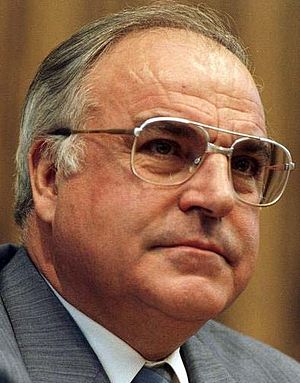 Kohl's 16-year tenure is the longest of any German Chancellor since Otto von Bismarck, and oversaw the end of the Cold War, the German reunification and the creation of the European Union.

Born in 1930 in Ludwigshafen to a Roman Catholic family, Kohl joined the Christian Democratic Union in 1946 at the age of 16.

He earned a PhD in history at Heidelberg University in 1958, and worked as a business executive before becoming a full-time politician.

Viewed during the 1960s and the early 1970s as a progressive within the CDU, he was elected national chairman of the party in 1973.

After he had become party leader, Kohl was increasingly seen as a more conservative figure.In the 1976 and 1980 federal elections his party performed well, but the social-liberal government of social democrat Helmut Schmidt was able to remain in power.

After Schmidt had lost the support of the liberal FDP in 1982, Kohl was elected Chancellor through a constructive vote of no confidence, forming a coalition government with the FDP.

Kohl chaired the Group of Seven in 1985 and 1992.As Chancellor, Kohl was committed to European integration and especially to the Franco–German relationship; he was also a steadfast ally of the United States and supported Reagan's more aggressive policies in order to weaken the Soviet Union.

Following the Revolutions of 1989 his government acted decisively, culminating in the German reunification in 1990.Kohl and French president François Mitterrand were the architects of the Maastricht Treaty which established the European Union (EU) and the Euro currency.

Kohl was also a central figure in the eastern enlargement of the European Union, and his government led the effort to push for international recognition of Croatia, Slovenia, and Bosnia and Herzegovina when the states declared independence.

He played an instrumental role in solving the Bosnian War.Domestically Kohl's policies from 1990 focused on integrating former East Germany into reunified Germany, and he moved the federal capital from the "provisional capital" Bonn back to Berlin, although he himself never resided there because the government offices were only relocated in 1999.

Kohl also greatly increased federal spending on arts and culture.After his chancellorship, Kohl became honorary chairman of the CDU in 1998 but resigned from the position in 2000 in the wake of the CDU donations scandal which damaged his reputation domestically.

Kohl received the 1988 Charlemagne Prize and was named Honorary Citizen of Europe by the European heads of state or government in 1998.

Following his death, Kohl was honoured with the first-ever European act of state in Strasbourg.Kohl was described as "the greatest European leader of the second half of the 20th century" by U.S.


Chancellor of Germany
Back
This content was extracted from Wikipedia and is licensed under the Creative Commons Attribution-ShareAlike 3.0 Unported License