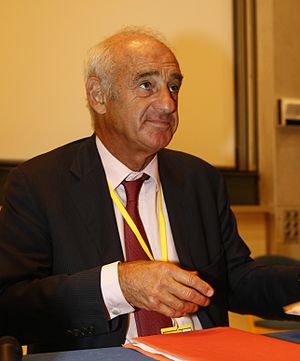 Henri Weber (23 June 1944 – 26 April 2020) was a French politician and Member of the European Parliament for the north-west of France.

He was a member of the Socialist Party (PS), which is part of the Party of European Socialists, and sat on the European Parliament's Committee on Culture and Education.

Weber was born in Leninabad (now Khujand), Tajikistan, Soviet Union, in a Soviet labor camp, on a hospital ship moored on the banks of the Syr-Daria river, to Polish Jewish parents who had fled from the town of Chrzanow, Galicia, during the Nazi 1939 invasion of Poland, and who later immigrated to France from Poland.

Weber died, aged 75, after contracting COVID-19 during the COVID-19 pandemic in France.