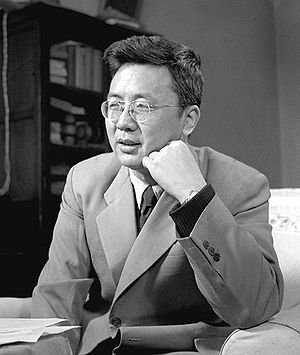 Hua Luogeng or Hua Loo-Keng (Chinese: 华罗庚;Wade–Giles: Hua Lo-keng; 12 November 1910 – 12 June 1985) was a Chinese mathematician and politician famous for his important contributions to number theory and for his role as the leader of mathematics research and education in the People's Republic of China.

He was largely responsible for identifying and nurturing the renowned mathematician Chen Jingrun who proved Chen's theorem, the best known result on the Goldbach conjecture.

In addition, Hua's later work on mathematical optimization and operations research made an enormous impact on China's economy.He was elected a foreign associate of the US National Academy of Sciences in 1982.

He joined the Communist Party of China in 1979.Hua did not receive a formal university education.Although awarded several honorary PhDs, he never got a formal degree from any university.

In fact, his formal education only consisted of six years of primary school and three years of middle school.For that reason, Xiong Qinglai, after reading one of Hua's early papers, was amazed by Hua's mathematical talent, and in 1931 Xiong invited him to study mathematics at Tsinghua University. Chinese mathematician
Back
This content was extracted from Wikipedia and is licensed under the Creative Commons Attribution-ShareAlike 3.0 Unported License