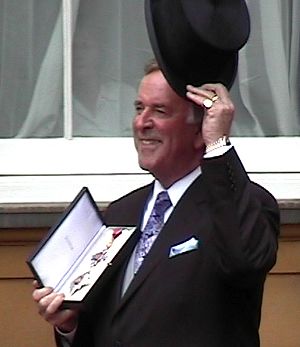 Sir Michael Terence Wogan (; 3 August 1938 – 31 January 2016) was an Irish-British radio and television broadcaster who worked for the BBC in the UK for most of his career.

Between 1993 and his semi retirement in December 2009, his BBC Radio 2 weekday breakfast programme Wake Up to Wogan regularly drew an estimated eight million listeners.

He was believed to be the most listened-to radio broadcaster in Europe.Wogan was a leading media personality in Ireland and Britain from the late 1960s and was often referred to as a "national treasure".

In addition to his weekday radio show, he was known for his work on television, including the BBC One chat show Wogan, presenting Children in Need, the game show Blankety Blank and Come Dancing.

In 2005, Wogan acquired British citizenship in addition to his Irish nationality and was therefore entitled to use the title "Sir" in front of his name when he was awarded a knighthood in the same year.