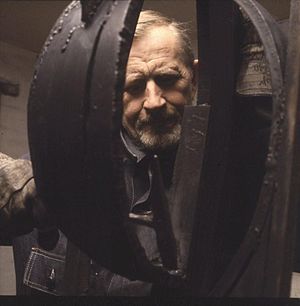 Jørleif Uthaug (3 August 1911 – 25 August 1990) was a Norwegian illustrator, painter and sculptor.He was born in Ørland, a son of Daniel Meier Uthaug and Anne Johanne Grande.

He was first married to Ingeborg Aaberg, and later to Guri Eve Christopherson.He studied with Per Krohg, Axel Revold and Jean Heiberg, and made his debut as painter in 1948.Among his works are People on the shore from 1961, and the sculpture Amphitrite, the wave and the sea birds from 1985.