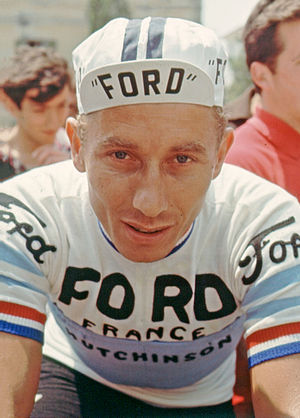 He stated before the 1961 Tour that he would gain the yellow jersey on day one and wear it all through the tour, a tall order with two previous winners in the field—Charly Gaul and Federico Bahamontes—but he did it.

His victories in stage races such as the Tour were built on an exceptional ability to ride alone against the clock in individual time trial stages, which lent him the name "Monsieur Chrono".

All total he was won eight Grand Tours in his career, which was a record when he retired and has only since been surpassed by Eddy Merckx and Bernard Hinault.

French racing cyclist
Back
This content was extracted from Wikipedia and is licensed under the Creative Commons Attribution-ShareAlike 3.0 Unported License