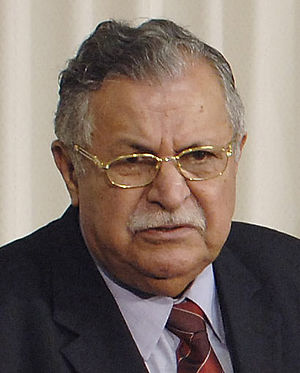 Arabic: جلال طالباني‎ Jalāl Ṭālabānī; 1933 – 3 October 2017) was an Iraqi Kurdish politician who served as the sixth president of Iraq from 2006 to 2014, as well as the president of the Governing Council of Iraq.

He was the first non-Arab president of Iraq.He is known as Mam Jalal (uncle Jalal in Kurdish) amongst the Kurds.

Talabani was the founder and secretary-general of one of the main Kurdish political parties, the Patriotic Union of Kurdistan (PUK).

He was a prominent member of the Interim Iraq Governing Council, which was established following the overthrow of Saddam Hussein in the 2003 invasion of Iraq.

Talabani was an advocate for Kurdish rights and democracy in Iraq for more than 50 years.Apart from his native Kurdish, Talabani was fluent in Arabic, Persian, and English.

He was also able to speak French to good proficiency.