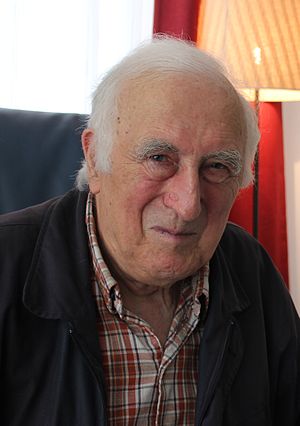 Jean Vanier (September 10, 1928 – May 7, 2019) was a Canadian Catholic philosopher and theologian.In 1964, he founded L'Arche, an international federation of communities spread over 37 countries for people with developmental disabilities and those who assist them.

In 1971, he co-founded Faith and Light with Marie-Hélène Mathieu, which also works for people with developmental disabilities, their families, and friends in over 80 countries.

He continued to live as a member of the original L'Arche community in Trosly-Breuil, France, until his death.Over the years he wrote 30 books on religion, disability, normality, success, and tolerance.

Among the honours he received were the Companion of the Order of Canada (1986), Grand Officer of the National Order of Quebec (1992), French Legion of Honour (2003), Community of Christ International Peace Award (2003), the Pacem in Terris Peace and Freedom Award (2013), and the Templeton Prize (2015).

In February 2020, an internal report published by L'Arche concluded that Vanier sexually abused six women in Trosly-Breuil, France, between 1970 and 2005.

The investigation was conducted by the UK-based GCPS Consulting Group.