His resignation in protest of Ford's unconditional pardon of former President Richard Nixon is still regarded as a rare act of conscience by a high-ranking public official. 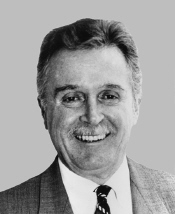