Gerardo Luigi Colonna (September 17, 1904 – November 21, 1986), better known as Jerry Colonna, was an American musician, actor, comedian, singer, songwriter and trombonist who played the zaniest of Bob Hope's sidekicks in Hope's popular radio shows and films of the 1940s and 1950s.

He also voiced the March Hare in Disney's 1951 animated film Alice in Wonderland.With his pop-eyed facial expressions and walrus-sized handlebar moustache, Colonna was known for singing loudly "in a comic caterwaul," according to Raised on Radio author Gerald Nachman, and for his catchphrase, "Who's Yehudi?", uttered after many an old joke, though it usually had nothing to do with the joke itself.

The line was believed to be named for violin virtuoso Yehudi Menuhin, and "the search for Yehudi" became a running gag on Hope's show.

Colonna played a range of nitwitted characters, the best-remembered of which was a moronic professor.Nachman wrote: Colonna brought a whacked-out touch to Hope's show.

In a typical exchange, Hope asks, "Professor, did you plant the bomb in the embassy like I told you?", to which Colonna replied, in that whooping five-alarm voice, "Embassy? 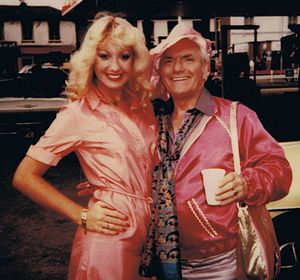